University of Kansas researchers with funding from the National Institute of Biomedical Imaging and Bioengineering (NIBIB) have developed a microfluidic device to diagnose and monitor multiple myeloma. The low-cost, reusable system uses a few drops of blood to obtain results that would otherwise require a painful bone marrow extraction. 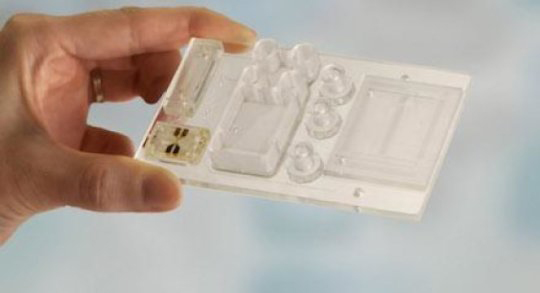 A low-cost, reliable blood test that uses a small plastic chip about the size of a business card can deliver the same diagnostic information as a bone marrow biopsy. Credit: University of Kansas|KU News Service

“In contrast to the current bone-marrow biopsy method, testing for multiple myeloma or other plasma diseases using this device could be less costly and much more convenient, said Tiffani Bailey Lash, Ph.D., director of the NIBIB programs in Connected Health (mHealth and Telehealth) and Point-of-Care Technologies.

Multiple myeloma is a form of cancer that affects plasma cells, a type of white blood cell that is important for a healthy immune system. Plasma cells originate in the bone marrow, where they are 100 times more prevalent than in circulating blood. The current way to test for multiple myeloma, therefore, is with a bone marrow biopsy—passing a needle through the skin and into a large bone to extract a small length of marrow the width of a pencil lead. The marrow is evaluated in a pathology lab for the presence of diseased plasma cells.

In their study published online Jan. 22, 2018, in Integrative Biology, the researchers designed a microfluidic device to detect diseased cells from a blood sample, obtained with a simple blood draw. The device has 50 channels in sine-wave paths produced within a plastic plate approximately the size of a business card. Antibodies on the surface of the channels specifically capture plasma cells; an enzyme is used to release the plasma cells for analysis.

The researchers tested 52 samples, including five from healthy blood donors. They transferred a blood sample to the device, where it captured plasma cells affected by multiple myeloma. They performed several types of analysis on the captured plasma cells looking for high levels of circulating plasma cells that indicate disease stage. The device detected circulating plasma cells in all the patients with active multiple myeloma. The researchers, however, suggest that more studies will be needed to assess the device for this use, as well as for detection of other types of plasma diseases.

According to senior author Steven Soper, Foundation Distinguished Professor of Chemistry and Mechanical Engineering at KU and a member of The University of Kansas Cancer Center, the device will be able to determine the stage of the disease, what type of drug will best treat the disease, and monitor for signs of recurrence if the disease goes into remission.

Soper’s team has been working for the past 10 years to develop blood-based tests for a variety of cancers. They are using the same test and technology to monitor disease recurrence in children with another form of blood and bone cancer called acute lymphoblastic leukemia. In a clinical study underway at Children’s Mercy Hospital in Kansas City, they are using a reprogrammed device to search for leukemia cells in circulating blood, circumventing the need for bone marrow biopsies.