Bedside robots could do swathes of the work now done by doctors and nurses, saving the NHS almost £13bn a year – a tenth of its budget – a major report says today.

The controversial  study led by surgeon and former health minister Lord Darzi calls for the “full automation” of health and social services, claiming it would give staff “time to care” for patients.

Almost one third of the tasks now done by nurses, and nearly one quarter of that done by hospital doctors could be done by robots and artificial intelligence systems, it says.

And the widespread use of such methods could save the NHS almost 10 per cent of its annual running costs, the report says, while “carebots” in homes and care homes could take on 30 per cent of the workload now done by humans.

The research, due out next week [June 19], follows calls from the Health and Social Care Secretary for an expected cash boost to be focussed on a “technological revolution” across the NHS, transforming the way it deals with pressures on it.

Jeremy Hunt has said he expects Theresa May to announce a “significant” investment in the health service, backed by a 10-year-plan, but has said funds must be used to change the way services are delivered.

The new report develops the proposal, calling for a specific fund to be created  to ensure upfront investment  in technology. 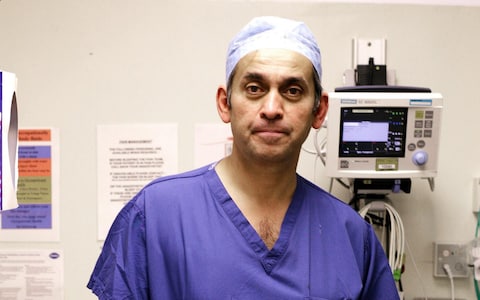 The review, carried out by the former Labour health minister and by former Conservative health minister, Lord Prior, sets out a future where robots and artificial-intelligence (AI) based systems are used to assess and diagnose patients, as well as increasingly used in surgery, and assisting with meals, transportation and rehabilitation.

The findings, released by think tank the Institute of Public Policy Research, say “carebots” could be used to keep frail elderly people in independent at home, encouraging their owners to wash, dress, eat and drink.

They could also take on more maintenance of the home, freeing up those paid to care to spend more time doing it, the study suggests.

Its projections – the first detailed analysis to examine such trends – forecast that almost a third of work currently done by nurses and GPs, and nearly one quarter of the tasks done by hospital doctors could be done by robots or AI systems.

And it also says NHS staff should be promised to a “right to retrain” if technology renders  their skills obsolete.

The Prime Minister is expected to announce an increased funding package for the NHS, in the approach to its 70th anniversary, on July 5th.

The new review, led by Lord Darzi, a former Labour health minister, assisted by Lord Prior, a former Conservative health minister, follows their calls for a penny to be put on national insurance, as part of funding increases which would see an extra £50bn a year for the NHS by 2030.

The report says much of the spending should  be invested in new technology, with automation able to save £12.5bn a year for the NHS, and £6bn a year from social care budgets.

Echoing a remark by Aneurin Bevan, Minister for Health when the NHS was launched in 1948, Lord Darzi’s report says: “In the 21st century NHS, it might not be the sound of a bedpan dropping that is heard in Whitehall, but that of a robot picking it up.

“The NHS turns 70 this year but we must turn our sights to the future. We should not accept an analogue NHS in a digital decade.”

The report insists that such changes would mean NHS and care workers spent more time with patients and vulnerable elderly people.

But it also suggests that such technology could fulfil roles as companions for those who are lonely, pointing to trials of robotic pets, “providing some of the comfort that already comes from companion animals but without caring responsibilities that live animals require.”

Some have raised concerns about the use of robots to fulfil “human” functions.

Earlier this month, Esther Rantzen, veteran campaigner and founder of Silverline, a charity which tries to reduce loneliness and isolation, said: “All this remote care that you can do where you can track the little old person wandering from the kettle to the fridge so you know that they’re still up and about, I suppose that’s OK as a sort of failsafe, but nothing replaces company.”

“I can imagine a spaniel as company, I’m not a cat person but I can imagine a Persian cat could be company, but I cannot see myself sitting next to a robot watching television,”  she added.

The Health Secretary has commissioned Dr Eric Topol, an expert in genetics and digital medicine to carry out a review into the use of genomics, robotics and artificial intelligence in the NHS, which reports next month.

In the new  report,  Lord Darzi calls on ministers to create a special fund  to invest  in the digital  infrastructure needed to move  to full automation of repetititive  and administrative tasks in health and care.

It says the change will not make staff obselete.

“Unlike in some industries, where there are fears that automation will lead to job losses, in health and social care it will complement human skills and talents, by reducing the burden of repetitive and administrative tasks and freeing up of staff to spend more time on direct clinical care with patients,” the review says.

But it insists all staff impacted by automation should  be offered “the right to retrain”.

Lord Darzi, a pioneer in robotics-assisted minimally invasive surgery, also highlights the fact that such systems are already able to undertake some surgical tasks such as tying knots and making stitches with greater accuracy and dexterity than humans.

And the report says AI based systems, including machine-learning algorithms, would be used to make more accurate diagnoses of diseases such as pneumonia, breast and skin cancers, eye diseases and heart conditions,  while  biosensors will increasingly be used for  remote  monitoring, to detect changes which could be deadly.